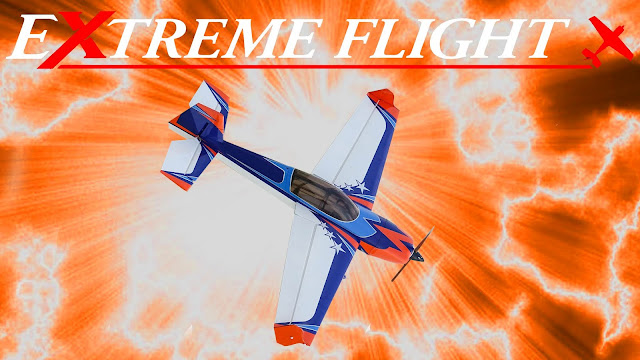 
The best news is in a lot of ways this is like flying the old Extra EXP that we love so much. It's just better. It's lighter so it is more floaty to fly. If's stiffer, so it flexes less under load and tracks better, especially coming into and exiting snaps, spins, and tumbles. You can pinpoint and control your exit better, which makes you look better.
Overall, the V1's character has not changed with the V2 update, which is a good thing because it didn't need to. At the time of the V1's release many of us were saying this plane was truly a spaceship that was 10 years ahead of it's time, and the new equipment is proving this out. The equipment has finally caught up to the plane, and now we can unlock the full potential that's always been there. 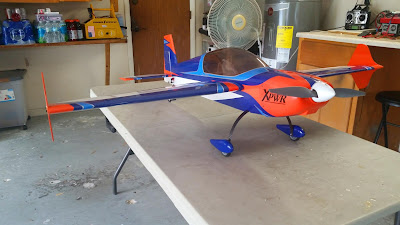 The V2 flies exactly the same way, though it's smoother, more precise and more solid. In many ways it's just like picking up your old Extra EXP, because the flight dynamics haven't changed.....they have just been improved. It does everything better. Now with stiffer construction, the Extra locks in better than ever.
So far, this is proving to be the plane of my dreams. It's fast, sleek and sexy, and throws down nearly as well as a 52". Granted the Aura makes it fly like a bigger plane, but it's even better than my V1, which has always been the plane I measure the others by. 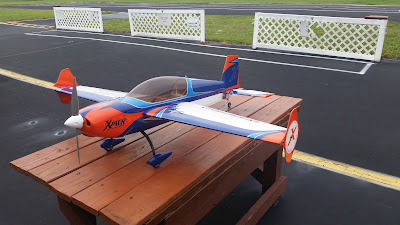 Precision has always been the Extra's hallmark, but once you learn the plane's nature it's 3Ds as well as anything. The Extra does have one advantage over the others in 3D, and that's the plane's ability to slide in high rotation turns and maneuvers. Other planes will pop harder in a parachute, whereas the Extra will rotate to flat and settle into a high speed elevator maneuver, and you control the descent with throttle. This is one of the many secrets of illusion I can get away with pushing to the last second, and rotating at what appears to be too low, only to arrest the descent with a sharp blast of throttle.
I also like to rotate the plane hard at medium speed and let it slide merrily along with the nose up until I snap it around in a nice harrier turn with some rudder. In a lot of my 3D, the Extra is going one direction when it's actually pointing in another, kind of like deliberately sliding a car on a wet road for fun, only you won't get a ticket for doing it with the Extra.

For example, if you do a high speed parachute and hold the elevator in, the Extra will pop to level, and then drop into a High speed sinking elevator maneuver. This can be a little unsettling the first few times you try it, but the plane stays stable the entire time. The unsettling part is watching the plane go in a direction different from which it is pointed, but it's so amusing you get used to that pretty quickly, and it becomes a remarkable tool. I learned 3D on Extras, so to me this is how a plane is supposed to fly. It was when I got into planes that don't slide so much I realized not all planes do this as well and it's a useful flying characteristic.

For me, this is what makes the Extra so much fun to 3D. To have this sort of slow speed agility in a package that also offers spanking good precision is what's has kept the Extra as my favorite.
We have not had the time to set an Extra up for sport, but we plan to. For now I have simulated that with my low rates, and the V2 is an improvement here too.  The Extra does all the conventional maneuvers with the same ease as the V1, though being lighter and stiffer plays it's part in keeping the Extra ahead of the rest even for sport flying.
Aside from being more confident and being able to push a little harder, I don't fly the V2 much differently. It is so solidly rooted in the V1's advanced design that it was never gong to fly like a completely new plane. Like has been said, the V1 was so far ahead of it's time all it needed was a few updates to incorporate the latest construction techniques and materials. 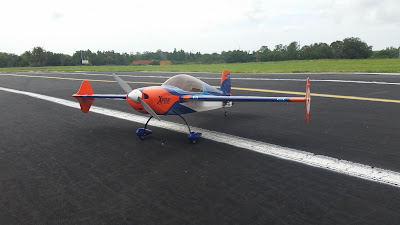 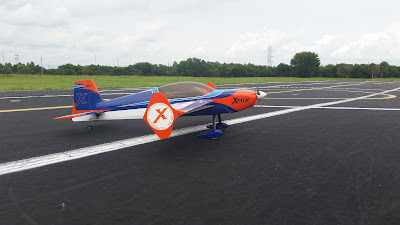 Well, this is embarrassing. I copied my raw video off my camera to a folder, and it simply disappeared. This was the only annoying moment of the project, but I did manage to recover one of them. We'll be flying and videoing all week, so this gives me an excuse to run a video presentation article.


Extra RXP V2__Savage Badassery from Doc Austin on Vimeo.
The Obligatory Final Nail
The flying qualities of this plane remain irreproachable and are the standard all 4 foot planes must be judged by.  More experienced pilots love the plane for it's sparkling precision and agile 3D manners. The Extra is so that experienced pilots love it for sharpening up their game, as well as just blasting around with and flying whacked out 3D.

Finally, there's the new guys, and it's important to cater to them because they will be tomorrow's veterans. Newer pilots will love the Extra's gentle and forgiving nature. It's smooth and stable, and never surprises the pilot, all things crucial to giving the new guys the best chance of success. Not only is the Extra friendly enough to fill the needs of the inexperienced and sport flyers, but it's no brainer build is exactly what they need to be successful.

We haven't talked about the plane's appeal to sport flyers, but the V1 performed those duties in stellar fashion. Like I say, we plan to do a sport report, though you can achieve pretty much the same thing by using the low rate from the manual. Like this the Extra flies a lot like a T28, though it's better at low speed and tracks off the scale. It's probably the perfect plane for T28 (and other gentle sport planes) pilots to graduate to, with unlimited room for those pilots to grow and expand their skills.
Those who have small cars and houses love the plane's practicality, ease of transportation and storage. Pilot's on a budget love it's modest pricing, though you can also trick the Extra out to the max for a little more with premium servos and a good electronic stability system. It can be a nice little plane, or a stone cold killer and everything in between. For over a decade the V1 was the most versatile plane on the market, and the V2 will certainly widen that margin considerably.

Essentially, it's just perfect for everyone. 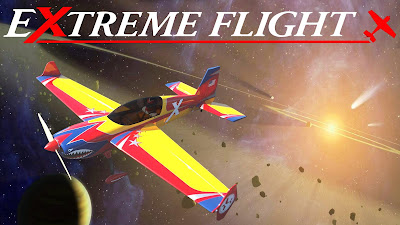